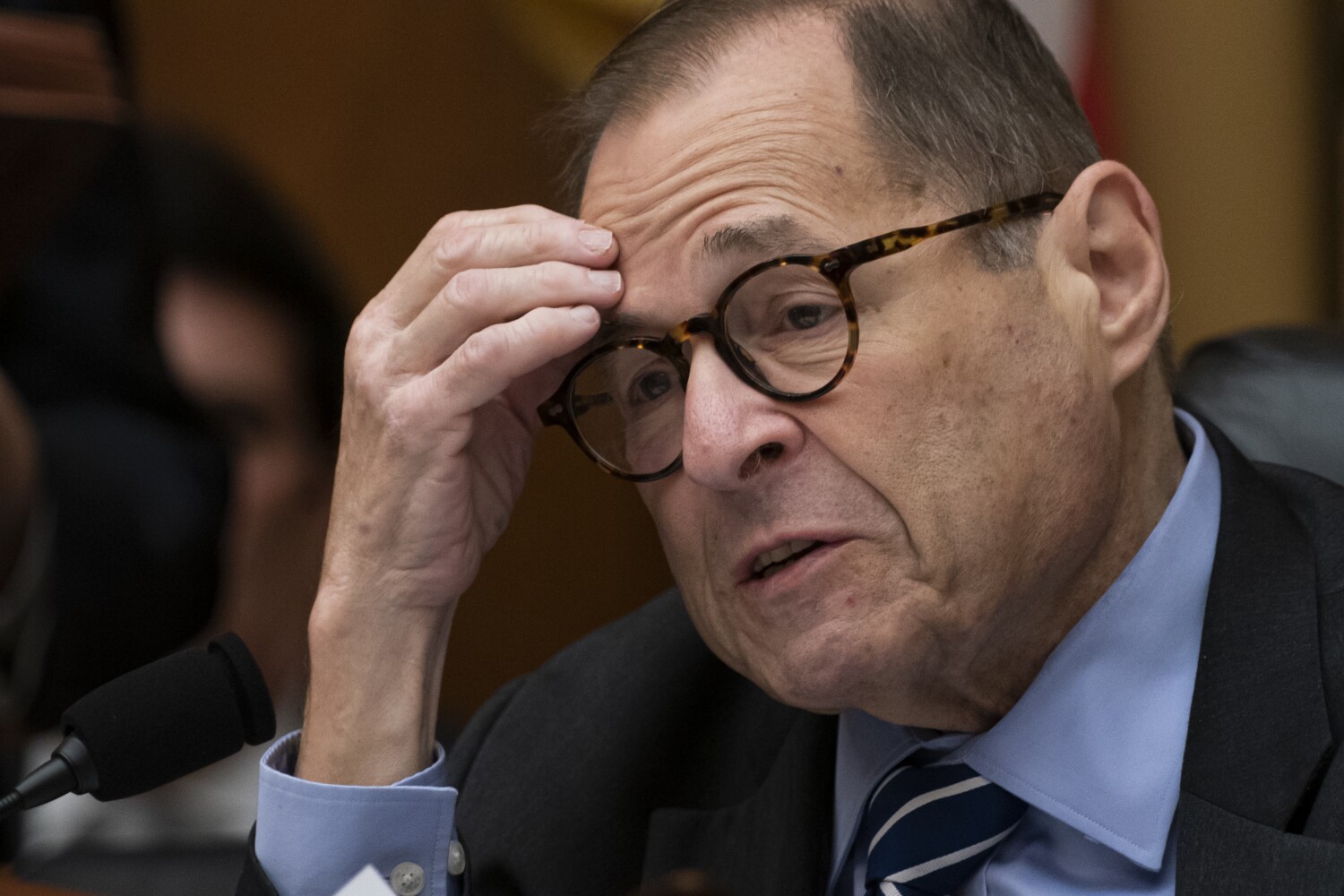 The House Judiciary Committee took a major step Wednesday toward defining how it could craft articles of impeachment against President Trump, encompassing both the president’s alleged abuse of power in the Ukraine scandal and obstruction of justice stemming from the Russia investigation.

In a daylong hearing marked by sharp partisan bickering, Democrats outlined a sweeping array of presidential misconduct that they said could warrant impeachment, including jeopardizing the constitutional balance of powers by stonewalling Congress and damaging the integrity of national elections by asking Ukraine to investigate Democrats.

With Democrats racing to bring impeachment to a vote, possibly before Christmas, Republicans have denounced the process as rushed and unfair. But the committee chairman, Rep. Jerrold Nadler (D-N.Y.), suggested the accelerated pace would block Trump from further misbehavior.

“If we do not act to hold him in check now, President Trump will almost certainly try again to solicit interference in the election for his personal political gain,” Nadler said.

The panel is responsible for drafting any articles of impeachment, and Wednesday’s hearing thus marked a milestone in a fast-tracked inquiry that began in September. It followed two weeks of public hearings in the House Intelligence Committee, and a Democratic report issued on Tuesday that cited “overwhelming” evidence that Trump violated his oath of office.

Trump weighed in from a NATO summit in London, accusing Democrats of being “very unpatriotic” for scheduling the hearing while he was abroad.

“I think it’s a disgrace. I think the Democrats should be ashamed of themselves,” he said before flying home Wednesday night.

Republicans on the committee staunchly defended Trump, denouncing the Democratic-led proceedings as a “sham” and “a simple railroad job.” Rep. Doug Collins (R-Ga.), the ranking member, said Democrats were motivated by “a deep-seated hatred of a man who came to the White House and did what he said he was going to do.”

Although the hearing produced no new facts about Trump’s activities or communications, it gave Democrats an opportunity to preview three potential articles of impeachment.

The first was abuse of power by urging Ukraine’s newly elected president, Volodymyr Zelensky, to announce investigations into former Vice President Joe Biden, a potential opponent in the 2020 election, and a debunked theory about Ukraine’s supposed meddling in the 2016 election.

The next was obstruction of Congress by refusing to honor subpoenas and ordering witnesses not to testify in the impeachment inquiry.

The final issue was obstruction of justice for, among other things, instructing his White House counsel to dismiss Robert S. Mueller III, the special counsel heading the Russia investigation. Mueller was left in place, and he submitted a lengthy report in March that found no direct coordination between Moscow and the Trump campaign, the initial focus of his inquiry.

“If you rush this impeachment, you’re going to leave half the country behind,” said Jonathan Turley, a professor at George Washington University Law School. “This is not an impulse buy item.”

Although Turley said he considered Trump’s actions improper, he said that Democrats had not made an adequate case for impeachment and that moving forward would be a historic mistake. He called the Democrats’ case thin compared to the evidence presented against President Nixon in 1974 and President Clinton in 1998.

“What we leave in the wake of this scandal will shape our democracy for generations to come,” he said. “I am concerned with lowering impeachment standards to fit a paucity of evidence and an abundance of anger.”

The three scholars called by Democrats all agreed Trump should be impeached, even suggesting Congress would be derelict in its duty if it failed to do so.

“If we cannot impeach a president who abuses his office for personal advantage, we no longer live in a democracy. We live in a monarchy, or we live in a dictatorship,” said Noah Feldman, a Harvard University law professor.

Pamela Karlan, a Stanford Law School professor, said Trump had tried to “strong-arm a foreign leader into smearing one of the president’s opponents in our ongoing election season. That’s not politics as usual.”

She added, “It is a cardinal reason why the Constitution contains an impeachment power.”

Michael Gerhardt, a University of North Carolina law professor who has written a widely respected textbook on impeachment, said the House had no choice but to push forward.

“If Congress fails to impeach here,” he said, “then the impeachment process has lost all meaning and, along with that, our Constitution’s carefully crafted safeguards against the establishment of a king on American soil.”

At times, Democrats and witnesses struggled to speak without interruption as Republicans called for adjourning the hearing or holding one of their own. They also asked to subpoena the still-unidentified whistleblower who set the scandal in motion by filing a complaint about Trump’s July 25 phone call with Zelensky.

Impeachment proceedings are expected to continue in the Judiciary Committee next week, but Democrats will have to quickly finalize articles of impeachment and send them to the House floor if they want a vote before Christmas.

House Majority Leader Steny H. Hoyer (D-Md.) said Wednesday that while that deadline is possible, Democrats have left open the possibility that the vote will slip into January.

Both chambers are preparing for what appears an inevitable impeachment vote in coming weeks.

Similar meetings took place in the Senate, which would hold a trial to determine whether to remove Trump from office if the House votes to impeach.

Senate Minority Leader Charles E. Schumer (D-N.Y.) gave a presentation on the mechanics of a trial to familiarize Democrats who weren’t in office in 1999, the last time the Senate held an impeachment trial. Clinton was acquitted in that trial.

Senate Republicans released a 2020 calendar with no plans for January, a reminder of the unpredictability of when impeachment articles may arrive from the House.

If the articles are drafted and approved by the full House, Trump would be the third president in U.S. history to be impeached. None was removed from office by the Senate. A fourth, Nixon, resigned when it was clear he would be impeached and convicted.

While the hearing was underway, the New York Times reported that Rudolph W. Giuliani, Trump’s personal lawyer, was visiting Ukraine to meet with former prosecutors who have faced allegations of corruption and promoted unfounded claims about Biden and his son Hunter.

“I am defending my client against almost self evident false charges. Not confirming where I am,” he told the Los Angeles Times in a text.

Giuliani has defied a subpoena from impeachment investigators and is under criminal investigation by federal prosecutors in the Southern District of New York, who are scrutinizing whether he violated laws regarding lobbying for a foreign government.

Who will win the 2020 presidential election? Don’t ask

Ten months in the past, I gave readers of this column an early preview of the race for the Democratic presidential nomination. Keep watch over the brand new faces, I sagely suggested: Sens. Kamala Harris […]